To have the optimal experience while using this site, you will need to update your browser. You may want to try one of the following alternatives:

Categories determine the type of water while classes determine how wet building materials are.

Category 1: Coming from a sanitary source and does not pose a major threat from exposure. An example would be a tub or sink overflow with no contaminants

Category 2: Contains significant contamination and can cause various health issues if consumed. An example would be discharge from a dishwasher

Category 3: Heavily contaminated can have pathogenic agents. If consumed it can cause major damage to one’s health. An example would be a raw sewerage backup.

Class 1: Less than 5% of the combined space affected

Class 3: More than ~40% of the combined space affected

Class 4: Deeply held in low evaporation materials such as plaster, wood or concrete 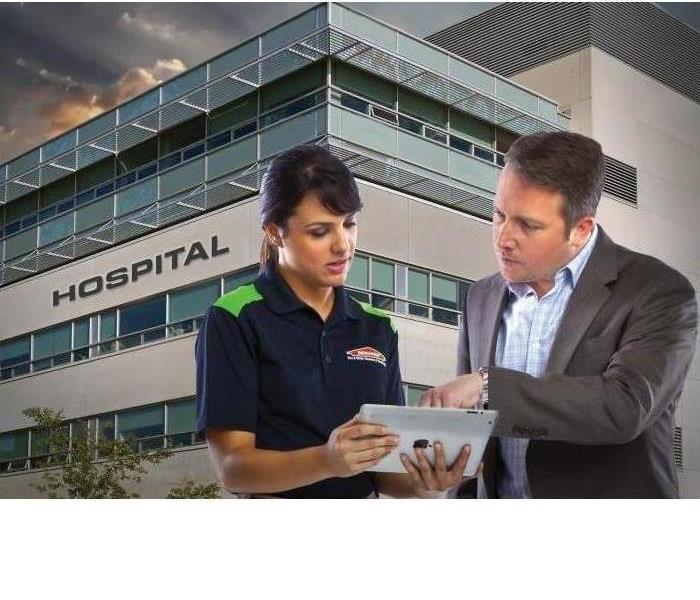 SERVPRO in the Healthcare Sector

We understand that time is crucial for both your operations and your patients. Our employees know how to handle regulated medical waste and undergo special training to work in operating rooms and other restricted areas, always adhering to HIPPA regulations. We also coordinate with environmental and infection control teams to monitor progress and make sure that all necessary health certifications are obtained prior to completing any job. Our number one priority is to quickly and safely take full responsibility of your cleanup needs so that you are free to focus on your number one priority: the patients.  At SERVPRO of Burlington/Woburn and SERVPRO Stoneham /Wakefield, our professionals are trained in adhering to the highest sanitation standards.

At SERVPRO we’re busy as ever in our local community.

On March 8’Th we attended the monthly Woburn Business Association function. It was hosted by Jake n JOES, a fairly new establishment in Woburn. They are doing very well and have gained a following already. This Wednesday evening event felt more like a Friday or Saturday. It’s a fun and casual atmosphere with quality food and drink.

As always, the event was a place to meet and share with local businesses. It pays to keep our business in and around the Woburn area. We support each other in our business and personal goals, and most importantly, stimulate our local economy. There are always ways to give back here too. Members of the Woburn and Burlington Rotary were in attendance as usual. The Rotary is a fine organization to check out if you’re looking for opportunities to serve.

At SERVPRO we love to help. How can we help you?